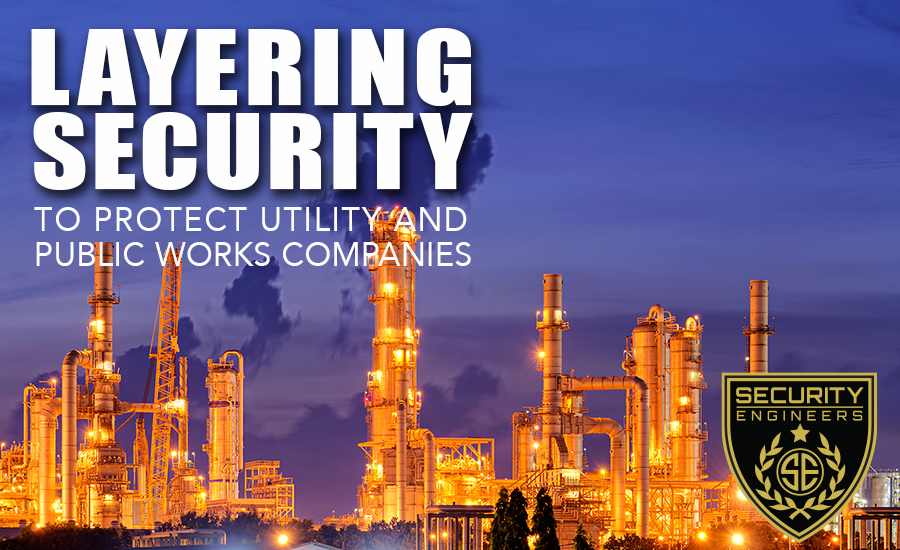 Layering Security Helps Protect Utility and Public Works Companies!
Modern utility buildings such as waterworks, electrical infrastructure, data centers, and more make up the lifeblood of the world. Civilization as we know it has become entirely dependent on the continuing operation and improvement of these facilities. Because of this dependency, these facilities make natural targets for debilitating attacks. A scenario by the insurance underwriter company Lyod’s was created simulating an attack on the Eastern Interconnection, which provides power to around half of the U.S. An attack targeting power generators would cause a blackout in 15 states leaving over 93 million people without power. Just 10% of the generators would need to be taken offline for the attack to successfully knock out power. The U.S. annual threat assessment has identified other world powers such as China, Russia, Iran and North Korea to be the greatest threat against our infrastructure we might face. These foreign actors usually represent one facet of securing our public utilities: software security. Each country possesses a continuously growing cyber warfare department which has created a sort of arms race to see whose security will hold up against whose attacks.

The other facet of securing critical utilities is physical security. As cyber security becomes more sophisticated, bad actors may turn to old methods of attacking critical systems. The infamous 2009 Stuxnet attack on the Iranian-controlled Natanz uranium enrichment plant by a double-agent working for Israel using a USB thumb drive has been used as a reminder that physical security is still very important. To protect these critical systems, utility facilities must still rely on a well-layered physical security system to protect points of access and make sure that the ability for a terroristic element to cripple our infrastructure is limited. This begins with a certified and thoroughly trained Security Officer.

At Security Engineers, our Officers are trained in a variety of methods to protect their work site and our critical infrastructure. Armed and unarmed officers are available as well as other services such as vehicle patrols. On the technology side, we offer CCTV monitoring, gunshot detection systems, and our innovative mobile surveillance units, which can be placed wherever they are needed around the facility to provide 24/7 surveillance to a work site. These units are monitored remotely and equipped with advanced motion detection software. In addition, they are cost effective and make for the perfect solution to plug gaps in your security layers or function as a layer of their own. With expertise in these many areas, we can offer complete physical protection of our nation’s vital infrastructure.

With experience in patrolling critical infrastructure facilities, we have the knowledge and training to function as the first line of defense against bad actors attempting to enter the facility and cause harm. When considering who you want watching the perimeter of your vital facilities there is no one better than Security Engineers.

Please complete our contact form and schedule a free consultation today! Let us help you secure your construction sites and help keep America running smoothly. We protect what matters most!